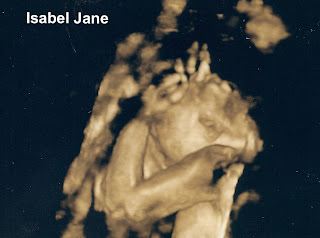 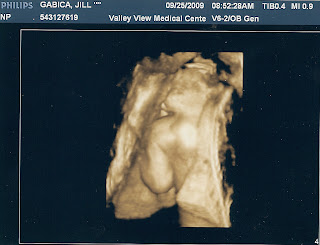 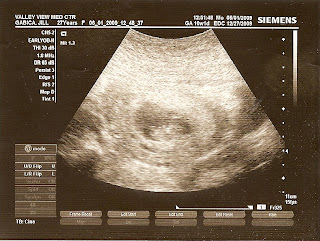 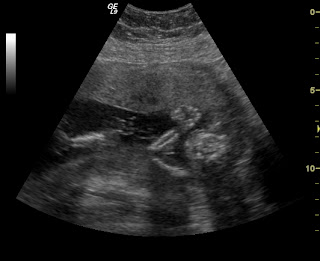 Okay, I realize that there will probably be people who are going to follow this blog that don't know anything about our little girl. So, here is Isabel's story.
Mark and I were overjoyed when we found out on April 21, 2009 that we were going to have a baby. The timing was perfect. The baby is due in late December and we would graduate December 11. We were naturally nervous to go from the lifestyle of college students to that of parents, but we knew it would all be great.
Everything was going better then normal. The baby had a strong heart beat and my health was great. Nothing to worry about. So, when our 18 week ultrasound rolled around on July 29, we were excited to find out if the baby was a girl or a boy. I mean, really, what else was there to worry about? We now know the answer to that question...
The ultrasound was going well, or at least we thought, except the tech asked us if we were sure about our due date. She said the baby was measuring small, but she gave us no reason to really worry. I mean, all the babies my sister and mother had were small, so it was no big deal to me. We did see that she is in fact a girl and from that moment, we knew she would be called Isabel Jane. At the end of the ultrasound the doctor asked if we had time to pop by our doctor's office. We thought it was weird, but this being our first baby, what did we know?
But, there are just certain things that, no matter how nieve you are, you notice. Like when you get to the doctor's office and they wisk you to a room to "talk to the doctor," that isn't a good sign. Or when your doctor is still dressed from the surgery they pulled him from, that isn't a good sign. But, what he had to tell us changed my life forever. Apparently, the ultrasound tech realized that something wasn't right about Isabel's head measurments, so upon further investigation she found that Isabel had a condition called Anencephaly. Anencephaly is a neural tube defect that occurs when the top of the tube that makes the brain and skull doesn't close between days 21 and 28 of pregnancy. Anencephaly is always fatal. However, he told us very little about Anencephaly other than "Your baby has no skull."
I can still hear him say that, "Your baby has no skull." Mark and I left the hospital thinking that we were about to have a baby with severe birth defects. It wasn't until the next day when we googled Anencephaly we found out that our baby was going to die, no matter what we did. But, in our doctor's defense for not telling us everything, he wanted to make absolutely sure that Isabel had Anencephaly. So, to make sure, we went to a specialist in St. George the next week. By then Mark and I felt sure that the diagnosis was right, so when it was confirmed, we were not suprised. What we were suprised at was how the "Specialist" was so insistant that we were crazy for continuing the pregnancy and how he was positive I caused this by not taking flic acid (which I was for 2 years!). Needless to say, we have never seen him again!
So the next while was a complete blur. We did have a baby shower in Idaho where we got some really beautiful things to remember Isabel by. Mark and I kind of gave up for a while and just went through the motions of work and eventually school. We continued our doctor's appointments as well as planning a funeral. We lived by the motto "Fake it until you make it."
People told us how strong we were. We didn't feel strong. In fact, we still feel so weak. We wondered how this happened. We questioned how we were going to deal with the very real possibility of losing Isabel before she is born. The statistics are not on our side. According to one study, 75% of babies who have Anencephaly will die either before they are born or during the first 24 hours of their life. The rest live a few days. Those are the luck ones. Those facts made us feel smaller and weaker. No matter what we did for her birth, she would die. As a parent, you try to protect your children. in this case, there is nothing we can do. No, we don't feel strong at all.
We did do what we could to prepare. We took a child birth class, got maternity pictures, and tried to make as much as we could with our time that we do have with Isabel. But nothing can really get you ready to say hello and goodbye to a baby. I guess all you can do is go through it and hope you come out the other side.
So, here we are, 37 weeks pregnant. Due to things going on, we are probably going to induce early. So we are trying to cherish each day and hope to be ready to meet our little Isabel.
Posted by The Gabica's at 9:22 PM

I know there is nothing I can say to ease the pain you are both feeling, but I wanted to say congratulations and I'm so sorry. I'm glad you guys are trying to enjoy all you have and taking every opportunity possible and I admire the strength you have put into your blog. All I can say is you and your family are in my prayers. God bless the gift you were able to receive as short as it may be. Don't ever be sorry for any blog venting you may do.